Why the insertion of a double space after the full stop is wrong. 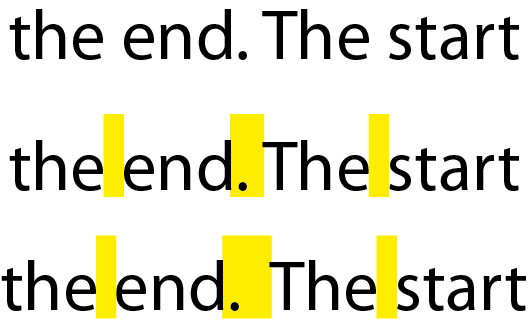 No double space was used as the typesetter could use the slightly larger spacer to do the job. The crucial factor is that the use of a stop creates a space above it thereby adding extra space at the end of a sentence for the eye to identify easily as the end. Couple this with an upper case letter to start the new sentence and there was ample definition for a reader to quickly see a sentence end.

With the invention of the typewriter shortly after things started to change a little. The typewriter does not allow for a variable em-space and so typists, lacking the typography skills of typesetters, began using two and sometimes three spaces in order to recreate the look of professional typesetting.

As publishing became more widespread the double space went into decline as typesetting equipment was used and this opened the door for IBM to introduce the Executive typewriter which allowed for variable spacing and reduced the use of double spacing after full stops.

In the current computer age there is no need to add an extra space after a stop. The objective of any sentence and reading material is to make it as legible as possible for the reader. Type is designed to allow the eye to flow across it easily with minimum effort. There is an en-space between each word which the eye easily jumps across, followed by a stop, which has a space above it facilitating the extra space needed at the end of a sentence, and then an en-space. This facilitates the necessary visual space the eye needs to decipher the end of a sentence. Coupled with the stop and upper case character for good measure of course.

So, as shown in the diagram above, an en-space is used between words and the use of a stop, en-space, and upper case letter, is the correct spacing for ending a sentence to allow the eye he easiest route through your copy – double spaces should not be used.

Previous ArticleHow well do you know your brands?Next ArticleIs your company text justified?